But now that the season is effectively over for both of my teams, I can share with you the end results.

In the first league that I wrote about, the Balls Of Shame league, I won the championship!  First place!  The team got off to a slow 0-2 start as I was finding my way with the scoring system and waiting for players to come back from suspension.  After that, though, it was domination.  I only dropped two more games all year, one where all of the bye weeks hit me at once, and then again in the last game of the regular season, that weird Week 14.  A hard-fought battle in the first round of the playoffs got me to the championship game, which wasn’t terribly close.

This was my first ever fantasy football championship, so I’m giving myself a pat on the back.  My savvy pickup of Dwayne Bowe on the waiver wire was a critical component of the championship season, and 10 of my original 16 draft picks were on the roster at the end of the season.

As for my second league, SugarFL, the results were not so good.  I’ll either finish in 7th place or 8th place, depending on what happens in Week 17 of the NFL.  I had to scratch and claw all season just to make it to the playoffs, and then was knocked out in the first round.

It was a weird season, with more close games than anyone should have to go through in one season.  I had a 3-point loss, a 1-point loss, two 1-point wins, and two ties!  TWO FREAKING TIES!!!  That never happens.  The last of those 1-point wins was in Week 14, the last game of the regular season, a game where the winner would make the playoffs and the loser would be left out. 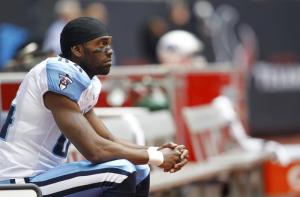 Randy Moss sat on my bench, too

My roster was ugly all season, only three players even cracked 100 fantasy points all year.  8 of my 14 original draft picks stayed on the roster through the end of the season, including dead weight Randy Moss, the most wasted #16 overall pick in history.

The final ignominy was to lose to a girl.  I know that women are perfectly capable of kicking my ass at this “sport”, but in a 14-team league with exactly one woman, it’s embarrassing to be the one guy who got knocked out of the playoffs by a girl.