I upgraded my MacBook Air today to OS X Lion, and I thought I’d share my first impressions of Apple’s new operating system.

Lion is the first Mac OS to only be available as a download through the App Store, which is perfect for the MacBook Air.  The Air doesn’t have an on-board DVD drive — although you can use an external drive via USB connection — and with Apple pushing out a new model of the MacBook Air, you know they want everyone to go electronic copy only, no discs to ship or sell at the retail stores.

The download took about 20 minutes on my home network, and then the install process took another 30 minutes or so.  My immediate thought after the install started was, “Man, I probably should’ve done this on another computer first and not the work computer… oh well, too late now!”

The first thing that shows up in the Dock after the install is the new Launch Pad feature.  It’s basically the iOS finder, where you can re-arrange your applications, group them, create new pages for the application lists, etc.  In other words, an entirely useless feature for the Mac.  I have the Dock already for my most-used apps; I have the Applications folder shortcut in the Dock for the less-common apps.  But, really, if you’re a power user on a Mac nowadays, you’re already using something like Spotlight, Quicksilver, or Alfred (my personal favorite).

Pretty much ruins my habits for using Expose and Spaces.  I had six Spaces pre-defined in Snow Leopard, with all of my common apps pinned to one of those Spaces (or all of them, in the case of iTunes).  After the upgrade to Lion, I had to reset my hot corners, and the Spaces become Desktops, but it’s an odd transition.  I wound up killing off all six Desktops for now, until I get the hang of Mission Control enough to start using multiple Desktops effectively. 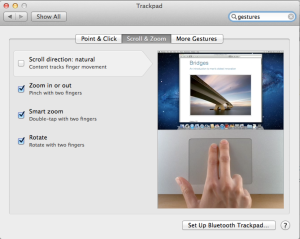 Which is natural to you?

This was the most jarring change for me.  Trackpad gestures reversed the movement of up versus down.  It’s like gravity has no meaning anymore!

It seems completely unnatural to me, in spite of Apple calling that the “natural” scroll direction.  Luckily, you can disable that gesture and revert back to pre-Lion behavior.

I know that the “natural” direction is what’s used by iOS, and I’m completely fine with it on the iPhone and iPad, but it seems daunting to change that habit on the computer after years and years of mouse movements, scroll wheels and trackpad gestures.

iCal gets a HUGE facelift, looking just like the iPad version of iCal now.  It’s a huge step forward, and I found it very easy to use.  The quick create for events is going to take some time to get used to, but the couple of events I created today for work picked up my syntax perfectly.

Another daily use application that gets a major UI update.  I love that the 3-pane view is in the core product now.  Previously, I’d used a 3rd-party app to achieve that view, which of course would break on every OS update that touched Mail.  Conversations view is interesting, a little too much with the animation for my taste.  The new search functionality will be a HUGE benefit for me.  One thing to know when you’re first upgrading is that it takes a while to update your mail database, so carve out some time to let your Mac chug through the process before you need to immediately jump into your email.

I use an external Western Digital hard drive to store my iTunes media and my iPhoto library, and it has to be connected anytime I want to A) use iTunes or iPhoto, and B) sync my iPhone or iPad.  Since the update to Lion, though, I’m finding that the external hard drive is unexpectedly being ejected.  I haven’t found any reports on the Internet about that being a problem with Lion yet, and I did a Disk Utility verify and repair, no problems found.  This could be a serious issue for me, I’ll have to keep an eye out for it.